The development of Catholic Education

The Development of Catholic Education

The role of educating the children of the new colony was first taken up by the Church of England which regarded itself as the Established Church. The Catholic and Evangelical churches which had a large number of followers among the Irish and Scottish settlers, challenged this, thus beginning an bitter debate that lasted for decades.

Up until the about 1850 there was state funding to churches to provide schools. Education was hampered by inadequate funding, poor facilities, untrained teachers and poor attendance. There were ongoing disagreements between the various churches claiming responsibility for education, and differing ideas about how, or if, religion should be taught in a combined school system. In New South Wales.

The result was that the colonies, one by one from the 1850s to the 1890s, introduced “free, compulsory and secular” education acts. The acts abolished state financial assistance to schools that were not government controlled.

Australia’s Catholic bishops strongly resisted the attacks on denominational schools and were firm in their opposition to public schooling. In 1869 the Australian bishops reaffirmed their determination to oppose the introduction of secular education and insisted on the teaching of Catholic doctrine in Catholic-run schools.

Rome had made it clear that Catholics should not accept an education system that was not connected to the Catholic Church. All Catholic children were expected to attend Catholic schools - parents were warned against sending them to state schools. The Catholic and Protestant population was becoming more separate and opposed One of the reasons the Catholic Church was able to keep its schools open was its access to a cheap labour force within its religious orders to staff its schools.

By the 1950s, post-war immigration, the rising birth rate and the tendency for children to stay at school longer meant that Catholic schools in particular struggled to cope with the increased cost of schooling and a diminishing pool of teachers. Political campaigns for the re-introduction of state assistance were staged. In 1962, Catholic schools in Goulburn, New South Wales, closed due to inability to meet government building regulations. The local government schools could not accommodate the sudden influx of students from the Catholic schools. The Catholic schools reopened after one week but the point had been made.

By the 1960’s, there were around 13,900 religious sisters and 2,400 religious brothers in Australia, although not all were in schools. These were the peak years and by the end of the century the numbers of men and women in religious orders would have diminished to about half. 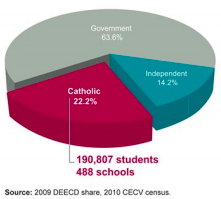 There were already a few religious orders in Australia: the Sisters of Charity had arrived in Sydney in 1838 and the Christian Brothers in 1843. The Sisters of Mercy landed in Perth in 1846 and the Sisters of St Joseph of the Apparition in 1855.

Australia also had home grown religious orders including the Good Samaritan Sisters, founded by Polding in 1857, and the Sisters of St Joseph, founded in 1866 by Fr Julian Tenison Woods and Mary MacKillop who is now recognised as Australia's first saint. By 1871, these 'Josephites' were running thirty-five schools in the Adelaide diocese. Like the imported orders they took vows of poverty, chastity and obedience, they lived in religious communities, wore distinctive habits, and taught huge classes. 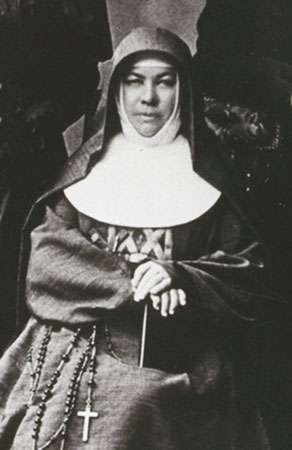 St Mary of the Cross, MacKillop

The largest of the male teaching orders, the Christian Brothers, had 115 brothers teaching in thirty schools by 1900. The Catholic Church now had its own system of primary and secondary education, through its various religious orders. Under their influence Catholic schools not only survived but flourished; the sisters and brothers were to be the mainstay of the schools for a hundred years.